I recently spent a week in the Otago Museum arthropod collection in Dunedin where I had  a wonderful time picking through the myriad of harvestmen. The sheer abundance and diversity of harvestmen in the collection, and the joy I get from being among all this history made me think – not for the first time – just how important biological collections are.

In my short career I have made use of numerous natural history collections around the world, from my academic roots at the impressive Lincoln University Entomology Research Collection, the secret corridors and quirky displays at the Museo di Storia Naturale in Florence, to the great halls of the British Natural History Museum.

While taking a break to look through the public displays is great fun, the main point of these missions is to delve into the arthropod collections kept behind the scenes. Phenomenal amounts of information are stored in never-ending stacks of drawers, filled with insects, bird skins, jars of pickled snakes…pretty much anything you can imagine! If you want to get an idea of the immense amount of objects stored in a museum’s collection, check out this amazing photo essay from the National Museum of Natural History in Washington DC. 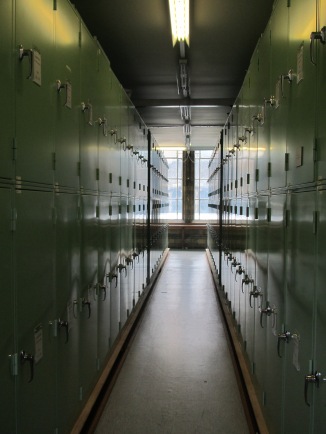 A drawer of pinned brentine weevils

One highlight for me was coming across some of Alfred Wallace’s 19th century collection when I was sorting through some brentine weevils in the British Natural History Museum. I’ll never forget that feeling of wonder that I was (carefully) holding the very specimens that Wallace mentions in his famous book The Malay Archipelago:

“I once saw two males fighting together; each had a fore-leg laid across the neck of the other, and the rostrum bent quite in an attitude of defiance, and looking most ridiculous” (p276-277)

These collections represent a snapshot in time and can tell a story about the community of organisms that were present at the place they were found. The possible contributions that collections can make to society are countless. This paper by Andrew Suarez and Neil Tsutsui describes some of the scientific applications from biological collections housed in museums. Museum collections have been used to understand the spread of Argentine ants across the USA, track the effect of climate change on species distributions, and even learn about the transmission of infectious diseases like influenza. What’s apparent from my own experience using collections, and those studies mentioned in the Suarez and Tsutsui paper, is that being able to use museums saves researchers an enormous amount of time and money. Imagine the cost involved in personally travelling to all of the places around the world to try to find the specimens you are interested in, and this would be impossible anyway if you want to look at historic patterns.

Visiting the natural history museums where the best collections are kept can also allow you to get to know the experts who also work on your study organisms. Natural history museums often hire scientists who as well as maintaining the collections usually have their own research specialty. These are the people who painstakingly describe new species and who build our understanding of the relationships between groups of species. Given the importance of describing the diversity of species we have in the world, taxonomists are an incredibly valuable group of scientists. If you are lucky, your new taxonomist friends might even invite you to stay at their Tuscan villa where you spend your evenings entertaining puppies and watching the sunset over the olive orchards.

During my latest visit at the Otago Museum I had a couple of goals. Firstly I wanted to get my head around the taxonomy of the long-legged harvestmen (Opiliones: Neopilionidae) in New Zealand. Otago Museum was a perfect place to do this because it houses an enormous number of harvestmen that were largely collected by the Dunedin-based arachnologist Raymond Forster, who was director of the museum from 1957 to 1987. Forster and others deposited specimens into the Otago Museum from all over New Zealand, with a particular focus on the South Island. The collection is therefore very useful when trying to figure out what species are where, and at what time of the year I should be looking. This will help me plan subsequent field trips around New Zealand to observe the mating and fighting behaviour of various long-legged harvestmen species, with the larger goal to try to figure out why males have such varying jaw shape and size. 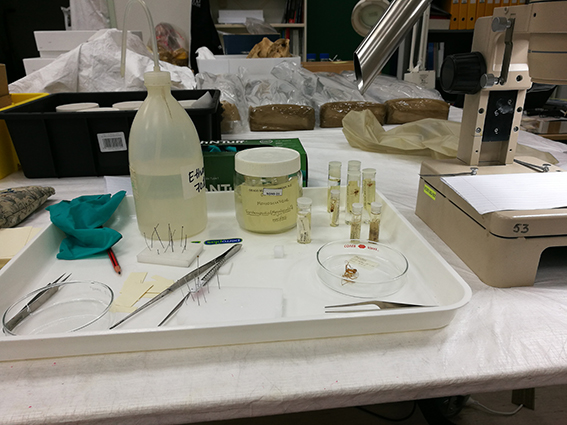 Tools of the trade

While I was there I also started collecting data on the morphology of as many specimens as I could get through (which was probably 0.0001% of the available collection). As I’m interested in jaw shape and size and how this relates to body size and the sex of the harvestmen, I took lots of photos that I will later use to take various measurements.

So once again I’ve been thankful that natural history museums exist and hope that we can continue funding these valuable institutions. Scientific progress would be greatly hindered if we lost museums and the experts who continue the tradition of describing and understanding our natural world.

I recently made one of those decisions which, although pretty normal for a lot of academics, meant uplifting my life in New Zealand and moving to Singapore. I finished my PhD almost 2 years ago now and have been lucky to get several postdoc positions, one at the University of Auckland (where I did my PhD) and a shorter stint at the Australian National University (playing with fiddler crabs in Darwin).

These opportunities allowed me to get publications from my thesis out, make some new collaborations and delve into new research areas. The time had come, however, to head off and do something different and so I jumped at the chance to take up a research fellowship at the National University of Singapore. Although exciting, this has meant that my husband and I had to make the decision whether to do this together or live apart for the next couple of years. We decided (after much discussion & ultimately sacrifice on his part) that he would come along too & so he quit his job, we packed up our house, put all our belongings in storage and off we went to Singapore!

So here we are, a few weeks into our new life living in a country the same size as my old city but with a LOT more people. The upside is that living in the tropics means there is a pretty incredible amount of wildlife to see, even in a little city park or on campus on my walk to work in the mornings. I’ve been having fun ticking off the birds on campus using this handy website & this great app of Singapore birds. I even found out today there is an app for the snakes of Singapore which is great as we have already spotted three snakes while out and about. I’ve also realized that birding is a great way to make friends – on the weekend we met a Singaporean bloke called Philip who gave us all the latest gossip on where to see an orange headed thrush (you take the track at Bukit Timah with the stairs, turn left, then go straight and you should see a bunch of other birders with their tripods). He also told us how to find this super cute baby Spotted Wood Owl at Pasir Ris Park which we spotted snoozing up high in a tree near the beach (turns out we need a better zoom lens).

Anyway, before anyone mistakes me for biologist working on charismatic megafauna, I should mention that I’m actually here to work on jumping spiders (Salticidae). As anyone who has a love for jumping spiders will know, they are renowned for their incredible diversity in colour and their charming courtship behaviours.

I’m going to be exploring a few different questions, but the main aim is to trace the origin and evolution of UV-colour in male jumping spiders and to compare this to how females use male colour to make judgments on male mate quality. Daiqin Li’s group ­­has already done a fair amount of work in this area already, which is actually really exciting for me as I spent a lot of time during my PhD working out the very basics of giraffe weevil ecology. Here I can jump in and build on all the great stuff already done and hopefully get stuck in to some bigger picture research such as using phylogenies to map the evolution of colour & its use in mate choice.

In the meantime, here are a couple of pics we’ve taken when out exploring the local parks on the weekends – still need to get a macro lens so mostly larger animals so far!